Frank and I were having breakfast yesterday and wondered when we were going to see our first fawn of the year. We have had a cool, rainy spring so it was no wonder we hadn’t spotted any of the spotted babies. About an hour later, there he was. Here is a sweet picture of them together. Even though you can’t see his face, he is adorable. 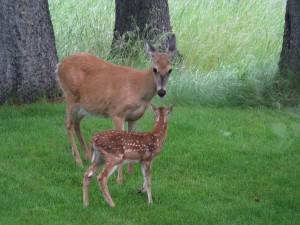 We are calling him a he because he is about a day old and was very rambunctious. He bolted around our yard at high speed and into our field. His mother was not happy with him at all. She stomped her foot and he came running back to her. I guess that is the equivalent to when my own mother would get that tone in her voice that I had pushed it to the limit with her!

View all posts by Katie →

Subscribe to the blog to receive updates via email and connect in whichever social media way suits your liking.